Festivals in India are grand, colorful and vivacious.

There are a whole lot of delicious dishes, glitzy decorations, elaborate costumes and thousands of people coming together as a community to celebrate these out-of-the-world events. This is the reason why many people from all over the globe are attracted towards this splendid siesta that India is all about. But this is not where the things end; there are bags full of bizarre customs in India that come attached to these events. Let’s proceed towards the southern parts where things aren’t as cold like they are in the North (excuse the lame pun) and get to know what all the heat and bizarreness is all about. 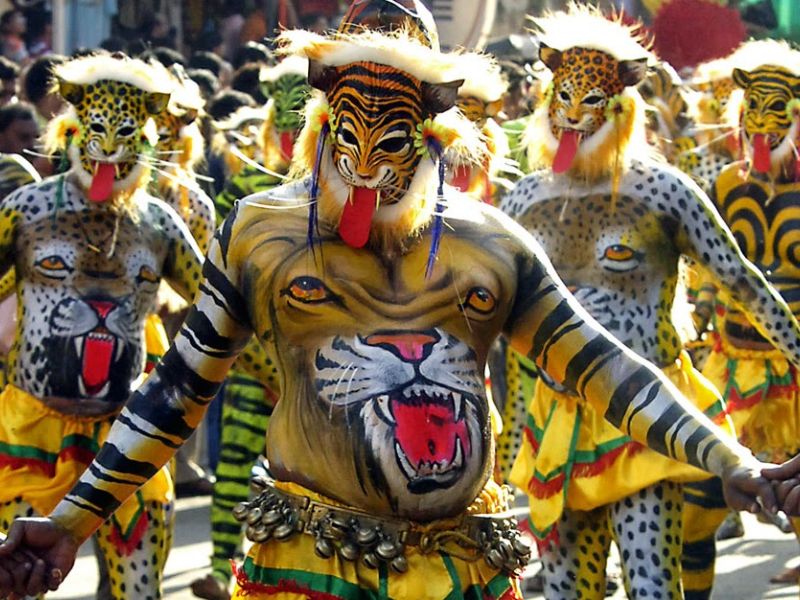 It’s not a zoo or a wildlife sanctuary we talk about when referring to the play of the tigers. Get ready to be amazed for this is a kind of dance that is performed by people in the Indian state of Kerala. This unusual ritual is a part of the festival of Onam, a twelve-day celebration dedicated to agriculture and harvesting in the state.

On the fourth day, the festivity starts and the Puli Kali ritual is performed by trained artists painted in the colours just like a tiger – yellow, red, white and black. The music consists of traditional beats and is created using the instruments like Udukku and Thakil. When the artist dances, he tries to mimic the steps and body language peculiar to a tiger. The scenes when the animal is being stalked by a hunter and the subsequent encounter between them are performed with great fervour and zest.

It is said that Maharaja Rama Varma Sakthan Thampuran, the Maharaja of Cochin introduced this folk art. He wanted to celebrate Onam with a dance that would reflect the wild and macho spirit of the force. To keep the tradition and the spirit of the festival intact, people perform the play of the tigers and attract loads of applause and praise.

When: 4th day of the Onam festival (August or September every year)
Where: Thrissur, Kerala 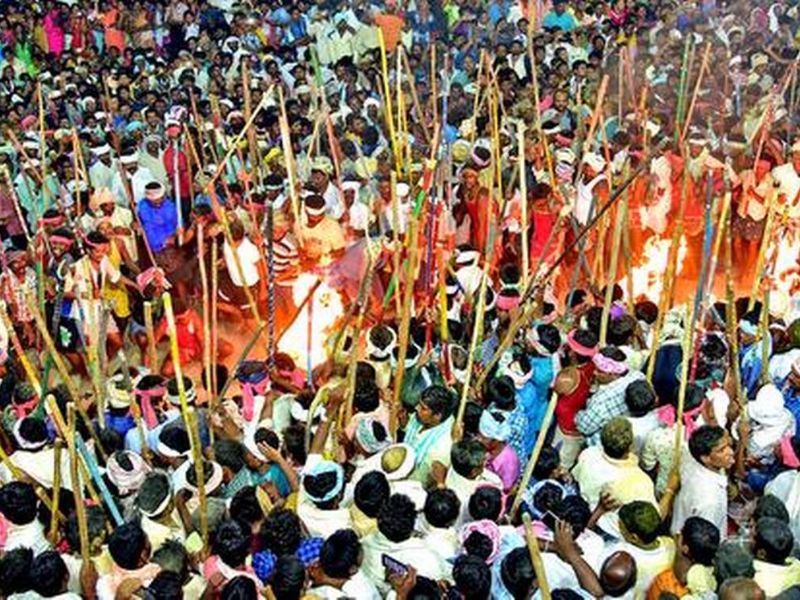 While some of the festivals in India are pretty interesting, there are handfuls which are plainly mind-boggling. One such event is the Bani festival that includes the act of thrashing each other with a laathi (bamboo stick) as a part of the celebrations. Don’t think of it as violence; when it comes to India, such celebrations mean love and dedication to one’s god. Conducted on a grand scale, the event is bound to leave many casualties at a time; amazingly enough, no one has ever died.

All of this takes place at midnight when the idols of Malleshwara Swamy (Lord Shiva) and Malamma (Goddess Parvati) are brought to the temple. A victory procession starts after that where men, mostly farmers start with the thrashing and do not budge even when drenched with blood all over their bodies. They do it all until the break of dawn to commemorate the killing of a demon by Mala-Malleshwara.

In earlier times, the ritual involved axes and spears. Sounds more like a Spartan War, isn’t it?

When: On the festival of Dushhera – on a full-moon day in the Hindu month of Ashvin (mostly September and October according to the Gregorian calendar; the actual date for every year varies).
Where: Devaragattu Temple, Kurnool District, Andhra Pradesh 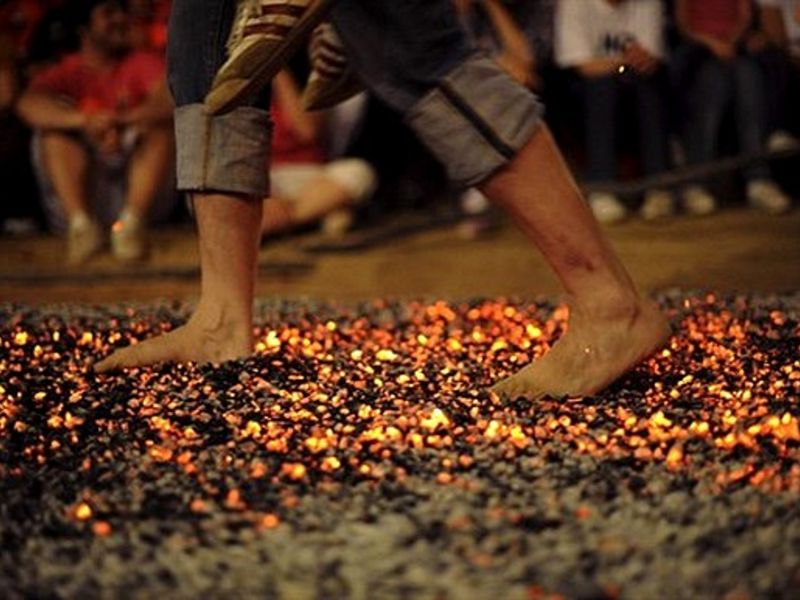 You thought walking in heels was a task? Or climbing the tough terrains of mountains? People in India go many steps further and walk on a path of burning coal to prove their dedication to their deity. This bizarre ritual that we talk about is called Thimithi, which is a part of the month-long celebrations that include Puja (worship) ceremonies and performance of the many tales from the Indian epic Mahabharata.

Interestingly enough, only men are allowed to take this burning path of hot embers. They perform this badass ritual to prove their dedication to the legendary goddess Draupati Amman or Draupadi, who is said to ward off the evil spirits. Many also do it to have their wishes fulfilled and to seek penance.

Draupadi was the wife of the Five Pandava brothers and their story is a part of Mahabharata. The men bet their wife in the game of dice and lost her to the Kaurava clan; this caused great turmoil and led to a great war. According to a South Indian legend, things weren’t not over with the war. Draupadi was forced to walk on a bed of burning embers to prove her fidelity. The ritual brings to life this sacrifice of the goddess, who will now bring prosperity among her worshippers.

When: October-November
Where: Tamil Nadu (The practice has now spread to the countries like Sri Lanka, Singapore, and South Africa) 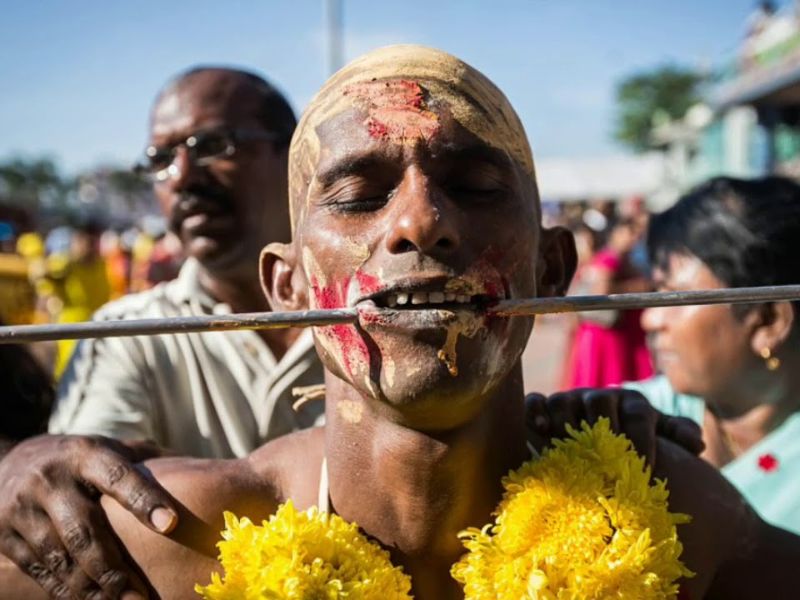 Getting your nose or ears pierced is one thing, but piercing your body with hot needles and hooking your flesh is something unimaginable. Even though it is hard to think about such a jarring act, the reality of it is actually a grand event in India.

On the festival of Thaipusam, many devotees of Lord Murugan or Kartikeya (son of Lord Shiva and Goddess Parvati) perform this bizarre ritual after observing a fast for 48 days. They pierce their bodies with hooks, skewers and lances called Vel. Some even try to pull tractors and other heavy objects with these hooks. A handful of the dedicated ones go an extra mile and pierce their tongue and cheek to impede their speech; this is supposed to help them attain full concentration towards the Lord. The entire scene becomes terrifying with the incessant drumming and chanting.

This unusual and bizarre festival commemorates the occasion when Goddess Parvati gave Murugan a Vel (spear) so he could vanquish the evil demon Soorapadman.

When: Full-moon day in the Tamil month of Thai (January/February)
Where: Tamil Nadu and parts of Southern India 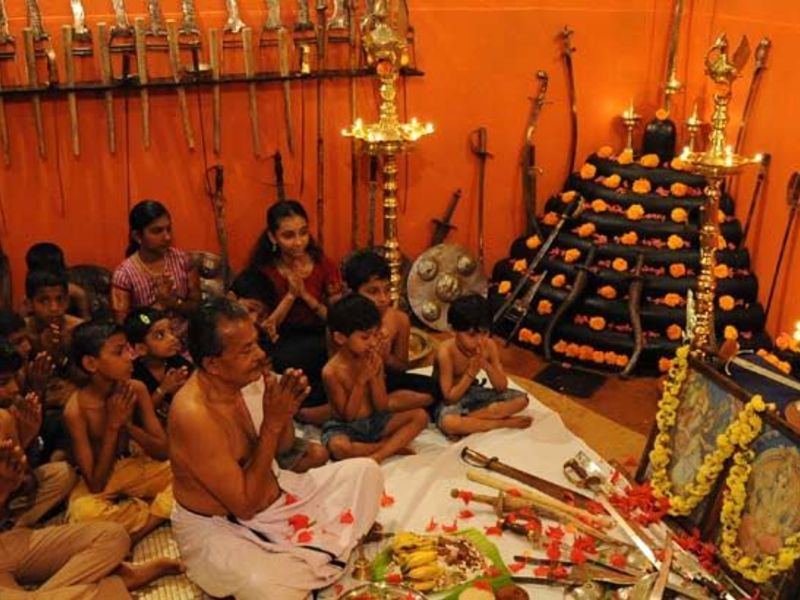 Indians believe that God resides in everything around – trees, clothes, car, books and even weapons. This is why it becomes important to honour every aspect of the daily life through rituals and ceremonies. One such custom is the Ayudha Pooja, when machinery and tools are worshipped, with a special emphasis on the weapons like guns, rifles, and swords. The principal deities revered along the tools are the Shakti goddesses called Saraswati (the Goddess of wisdom, arts, and literature), Lakshmi (the goddess of wealth) and Parvati (the divine mother).

The day is basically for every soldier and artisan who through this meaningful custom focusses on the importance of his work. It is said that the ritual activates the divine force that works behind the tools and machinery the soldiers and artisans use and help them to perform better. Every South Indian state has different ways to carry out this ritual, but the thought is one – appease the goddesses to bless their tools of work. You would be amazed to know that with the advancement of time, typewriters, computers, and printers are also worshipped.

There are many legends around this unusual and bizarre practice, the popular one being that of Arjuna (third of the five Pandava brothers). He retrieved his war weapons from the hole in a tree after he had returned from his time in exile. The war that ensued had him victorious and led to him returning to his kingdom after the war. This day, thereby, became auspicious to worship the tools and weapons, and to start new tasks.

When: On the ninth day of Navratra festival, a day before Dushhera festival (the dates may vary for every South Indian state)
Where: Tamil Nadu, Kerala, Karnataka and Andhra Pradesh

If you thought this was unimaginable and bizarre, wait for another edition of the crazy rituals that India celebrates. There is more to come and experience. Hang in there!

Street Food in Varanasi That You Must Try