While there are many bizarre rituals that are practiced everywhere across India, there are a handful of interesting ceremonies and festivals that give certain towns and regions a unique identity. The mysticism around these events originate from age old beliefs, customs that have been adopted with time and stories that are a part of ancient epics and scriptures. Read on to know about a few of these larger than life events and what is it that makes them so interesting 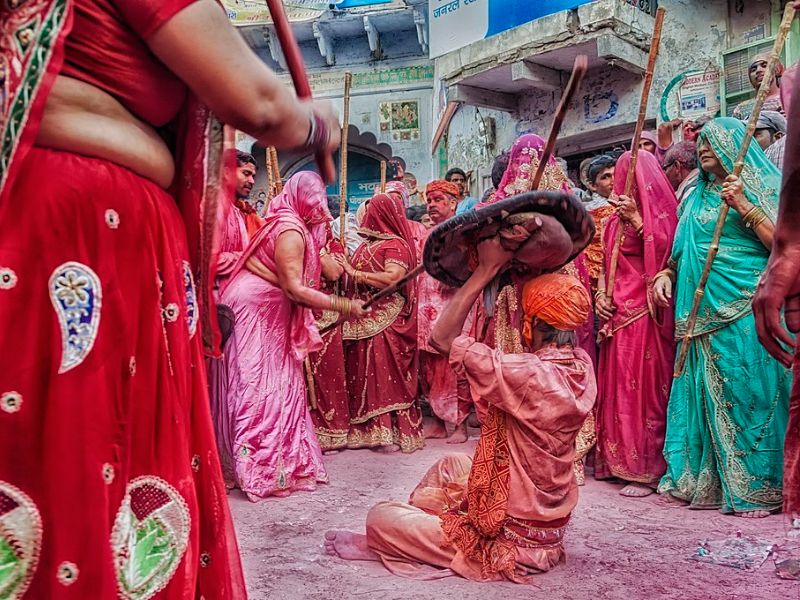 There are dozens of festivals in India, Holi being one of the most famous ones. People play with colours and have a great time dancing and eating. But what if we tell you that a twisted version of this festival takes place in a region where Gods used to live as humans avatars? You might be amazed or just won’t believe. We say you got to see it to experience the bizarreness associated with it.

A more rogue touch to the Hindu festival of Holi is the Lath Mar. Involving intoxicating herbal drinks, bamboo sticks and a whole lot of thrashing, this grand spectacle attracts journalists and photographers from all over the world. The significance of it lies behind a famous Hindu legend of Lord Krishna and his beloved Radha. According to the legend, Krishna (who hailed from the Nandgaon village) visited Radha’s village, Barsana along with his friends. They playfully teased Radha and her friends, and in return, the women taking offense at these advances thrashed the men with bamboo sticks and drove them out of the village.

The festival starts with the consumption of Bhang (a paste made from cannabis mixed with milk and other spices) by the village men. They then recreate the legend behind the day at the local square where married women come and beat them with bamboo sticks. The men in return use the shields to protect themselves from all the thrashing. The colors added to this bizarreness makes for a fun cultural Indian fiesta.

When: The event takes place about seven days before the actual Holi. There is a different date for it every year like most of the Hindu festivals.
Where: Barsana and Nandgaon, Uttar Pradesh 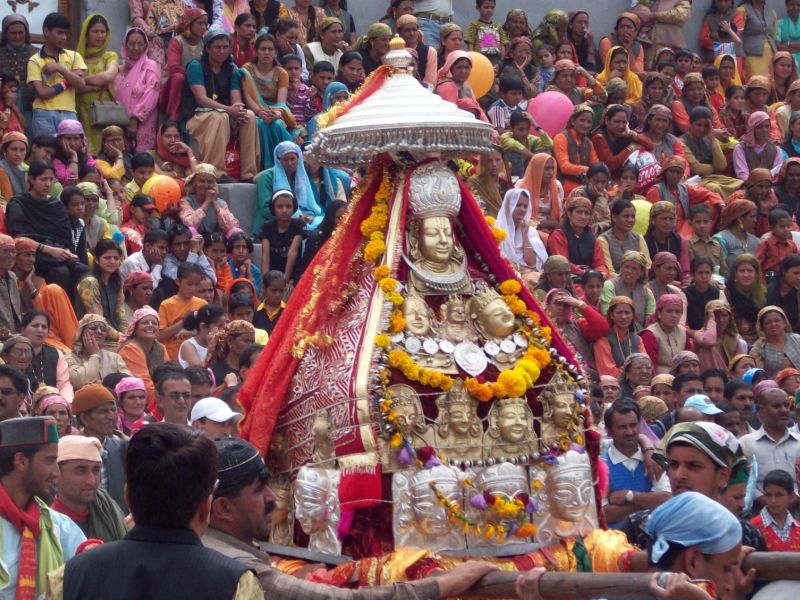 There are many festivals in India that involve bizarre rituals. The Bhunda festival although takes the craziness to a whole new level. The rituals involve choosing a man from the village who will perform a life-risking stunt in order to appease Goddess Ambika. If successful, the man is loaded with offerings like cash, jewelry, and grains which are gathered by the local temple way before the actual day of the stunt.

On the day of the festival, the rope (weaved by the man himself) is tied across two hills – one end on a high cliff and the other one, steep into the valley. The Bheda (the man performing the stunt) slides down the rope; if he survives, the offerings go to him and if he doesn’t, the whole act is regarded as a human sacrifice to the Goddess. In the former case, the goats are sacrificed instead. The festival is said to rid the villages and its people off the evil spirits. Lord Parshuram and Goddess Kali are also part of the legends associated with the festival. You would be amazed to know that the word ‘Bhunda’ itself means human sacrifice.

When: Every 12 years on a date decided by the local priest
Where: In and around the Nirmand region, specifically in the Nurpur Valley of Sutlej River.  The ceremony is observed in the area comprising sixteen villages in the outer Saraj area of Kullu and the bordering fringes of Shimla. A festival is supposed to be an event of great joy, fun, and frolic amongst a community. What if the very core of a festival is not a celebratory event? What if it is something that puts lives at risk? One such bizarre ritual is the Pathron Ka Mela or the Festival of Stones that takes place in the Indian state of Uttarakhand.

The rituals comprise of two groups of villagers from two different villages coming together and pelting stones at each other. This is done in the spirit of celebrations and offering a sacrifice to Goddess Kali. The blood of the ones who get injured is used to smear a ‘Tika’ on the forehead of the goddess’s idol, thereby completing the sacrificial duty of the villagers towards her.

There are many legends of as to why this strange festival is celebrated, one of them being the animosity of the Halog and Jamog regions of the state. A girl from Halog, who was engaged to the Prince of Rangioli gave up herself to the Sati (a woman burning herself on her husband’s pyre) practice after her soon to be husband was poisoned by the people of Jamog. This caused a fight between Halog and Jamog, resulting in stone pelting. Since then, the event is celebrated every year to recreate the legend and appease Goddess Kali.

When: Generally on the day following Diwali
Where: Devidhura, Uttarakhand and Halog village of Tehsil, Shimla; capital of the age-old princely state of Dhami. 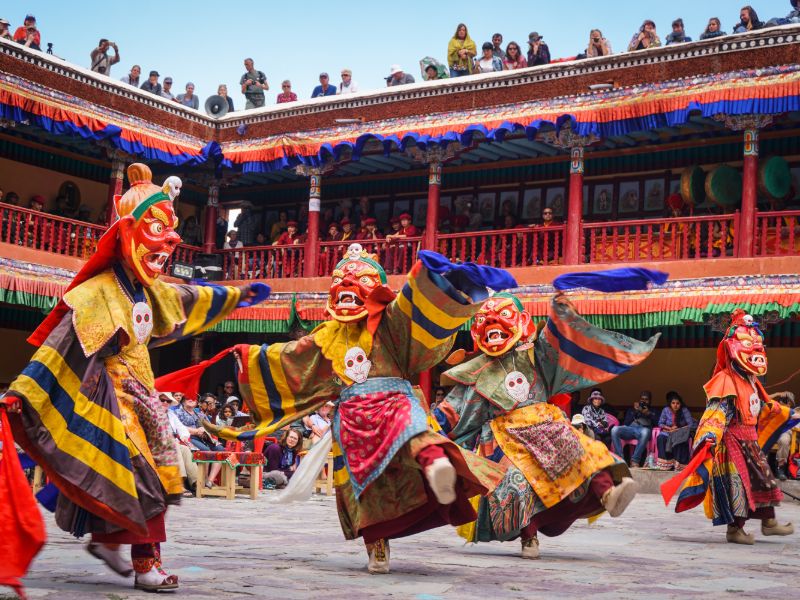 Recreating and re-enacting legendary stories is one of the many rituals that are weaved around the festivals of India. One such event is the Hemis Festival celebrated at a monastery (with the same name) situated in Ladakh. The Lamas here, also known as ‘Chhams’ put on elaborate masks that depict the various guardian divinities of the Dugpa order of Buddhism. The colours, designs, and patterns of these masks are so beautiful and interesting that the whole spectacle looks like a mesmerizing scene taken out of some legendary folklore.

Wearing them, the Lamas continue to re-enact the feats performed by the Guru accompanied by the music of drums, long horns, and cymbals. They also perform their traditional dance and numerous plays that have an underlying message of the triumph of good over evil. This two-day long event also sees the locals get dressed up in traditional clothes, vibrant headgears and jewelry like the cummerbunds.

The festival is 200 years old and is celebrated to commemorate the birth anniversary of Guru Padmasambhava, who is often said to be a reincarnation of Buddha. The day was first introduced by a member of the Ladakh’s ruling family who was later believed to be reincarnated as the monastery’s Head Lama known as ‘Sras Rimoche’ in the 18th century. Ever since the festival is celebrated with great enthusiasm. You would be amazed to know that every twelve years, the two-storey high ‘Thangka’ (sacred painting embroidered with pearls, semi-precious jewels on a beautiful silk cloth) of the Guru is brought out in the monastery for display.

When: 5th lunar month of the monkey year. For 2017, the festival dates are 3rd-4th July.
Where: Hemis Monastery, Ladakh 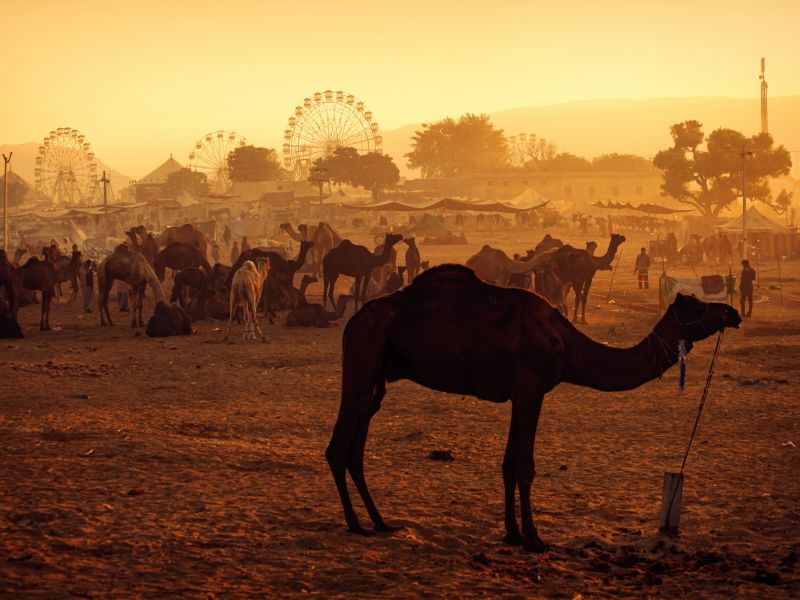 Imagine a fair where a plethora of breeds of animals and birds are traded. Now, enlarge the scale of this affair on such a scale that it becomes the biggest of its kind in an entire continent. This event we talk about takes place every year in the Indian state of Bihar, and is the biggest cattle fair in Asia till date.

Situated at the confluence of the rivers Ganga and Gandak, the town of Sonepur hosts such a grand affair that goes on for 15 days and stretches to even a month. One can lay hands over a humongous variety of farm animals, breeds of dogs, buffaloes, donkeys, Persian horses, ponies, goats, rabbits and even camels. The mighty elephant although rules the fair; There is a special Haathi Bazaar where well adorned, and decorated elephants are lined up for sale. You would be amazed to know that this fair is the only place where such a large number of elephants are traded. The fact that a lot of animals sold here cannot be traded legally makes it an unusual event that might not be seen anywhere else in the country.

The fair finds its origins in the ancient times when Chandragupta Maurya (340 – 297 BCE), founder of the Maurya empire in ancient India, used to buy elephants and horses across the river Ganges.

When: Kartik Poornima (the full moon day) in the month of November
Where: Sonepur, Bihar

Experience these bizarre rituals and customs for yourself and go explore the amazing country that India is!

10 Unusual Places to Stay In India