Lotus Temple: A Symbol of Architectural Intelligence and Religious Equality

The Lotus Temple in Delhi is an architectural and spiritual marvel that is also one of the top tourist spots in the city and the world.

The daily footfall of the temple is more than 10,000 people, making it over 4 million people around the year. The structure of it is like a giant lotus (hence, the name) made of marble. It possesses a pure white that sparkles like a dream when the sun spreads its magic over the city.

You may know what it looks like from the outside and why it is popular. But you might not know much about what it stands for, what it represents or how much work and toil has gone into its every crevice. This guide will explain you the intrinsic details about the structure and everything that it beholds within every fragment of its soul. Sit back and read on while we deconstruct everything for you bit by bit.

A Little Peek into the History of the Lotus Temple : 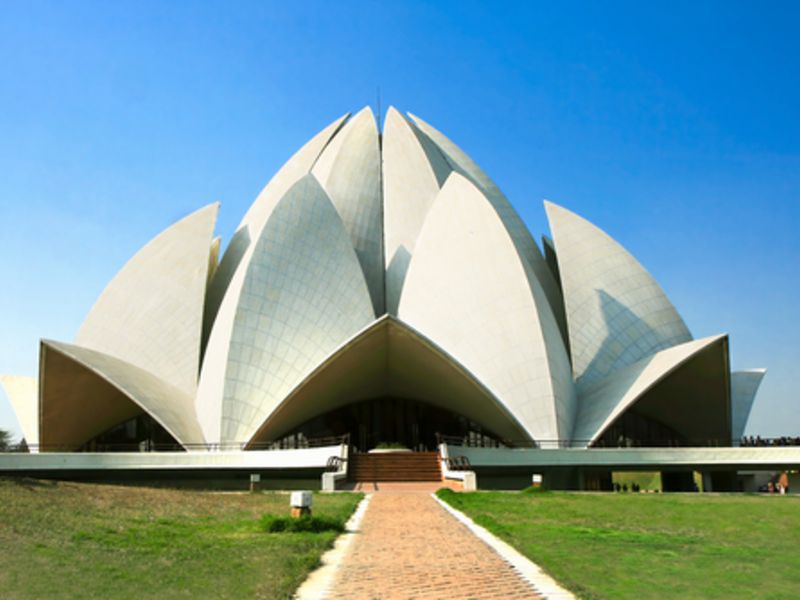 This iconic temple having a grand lotus flower design with a pristine look for all year long wasn’t conceptualized and built in a day’s time. It took some serious efforts for the whole design to come along, including the acquisition of the land on which it would be built eventually. The accessibility of the land was made possible due to a huge donation made by Ardashir Rustampur of Hyderabad. He gave away all his life-savings for the temple’s construction. The other part of the funding was sourced from Panama and Mozambique in Africa where a Bahai was serving a prison sentence.

2. Who Built the Lotus Temple? 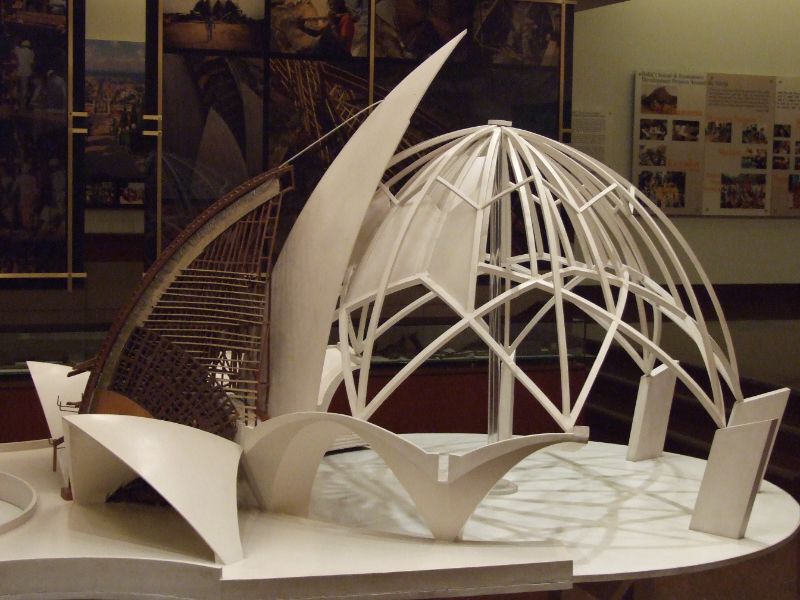 The amazing structure of the entire temple was designed by an Iranian architect, Fariborz Sahba. He was approached for the project in 1976, way later than the time when land for it was acquired. He was selected by the Bahai governing body for the project as he belonged to the Bahai religion himself. Being on this journey for about 10 years, he wasn’t just the designer but also the project manager. For this remarkable achievement, he was applauded by the architects from all over the world. A UK-based firm named Flint and Neil was also approached. The structural design project was given to them while the construction project was undertaken by the ECC Construction Group.

3. The Bahai Faith that the Lotus Temple Represents 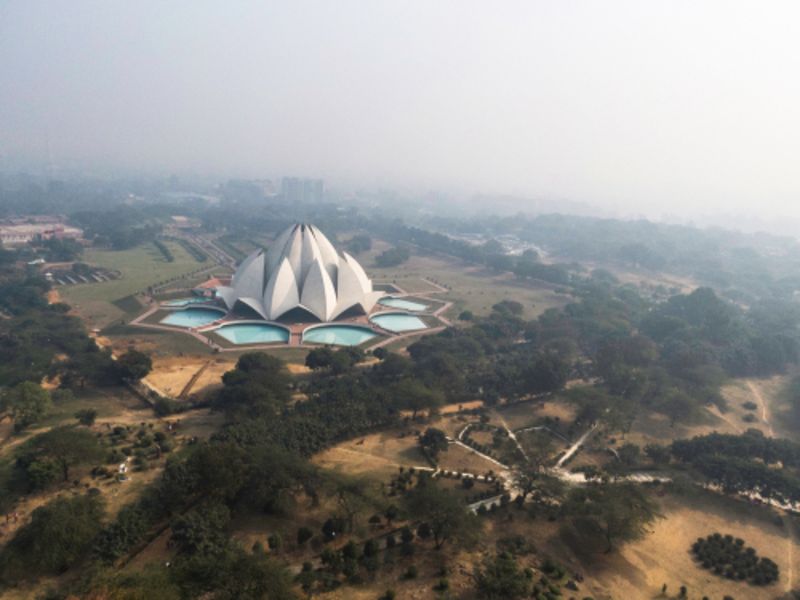 The Lotus Temple, also known as the Bahai Temple, stands not just for architectural excellence, but also for the tenets of the Bahai religion. This faith goes on to propagate the equality and unity of all religions, hence stating that there is only one god that blesses this entire universe.

It is said that the Bahai originated in Iran by a religious Prophet by the name of Bahaullah. His family went on to spread the doctrines after his death. It actually finds its traces in another religion called Babi; an Abrahamic monotheistic faith, that also believes in the one incomprehensible God. Today, it has become a world wide symbol of peace.

What’s in Store for You? 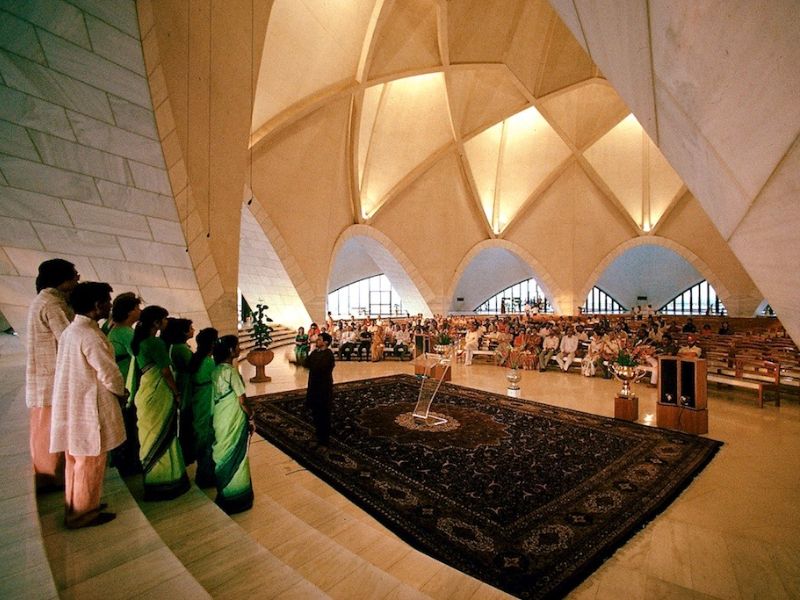 Other than admiring the architectural beauty and the amazing symmetry of this gorgeous place, you can also indulge in some spiritual sessions. Either be a part of the regular prayer sessions here or just immerse yourself in some ancient Bahai scriptures to get to know more about this beaming peaceful religion. The Lotus temple has an audio-visual room and a library where religious books are kept for the visitors. You can set these scriptures to the tunes of a choir and be an intrinsic part of the spirituality of the Bahai faith. However, playing any musical instrument is prohibited inside the temple.

Apart from the prayer and reading sessions, there are four core activities offered by the Bahai community at the temple: Childrens’ Classes, Junior Youth Classes, Devotional Meetings and Study Circles. While you are here doing all of this, why not indulge in some meditation and get one with your inner-self?

Architecture is What Makes It Special! 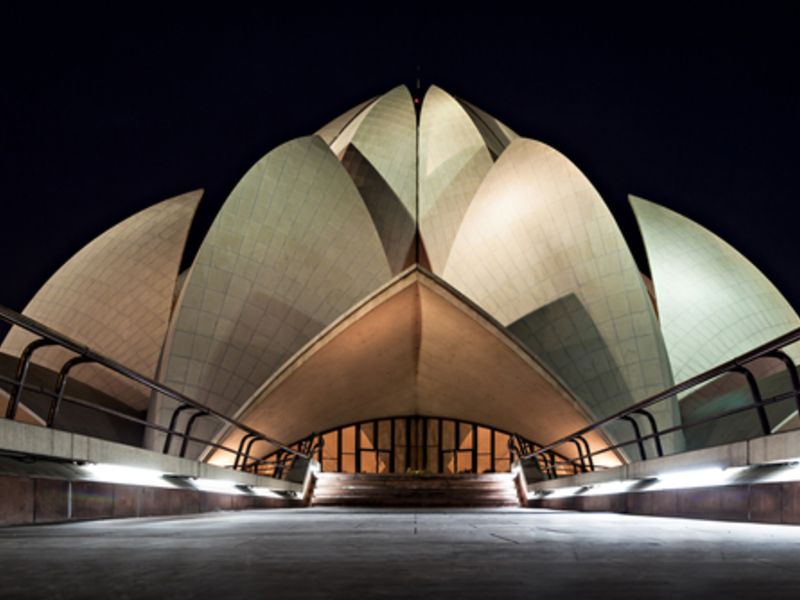 Keeping the best chunk for the last, let’s dive straight into the architectural realms of the Lotus Temple. What is so unique about the design of this place that makes it so special? It is, in fact, the lotus design, but the way it has been brought together to suit the Bahai faith is simply amazing. The Bahai faith, actually, has nothing to do with a lotus flower. The requirement for the place of worship is that of a circular shaped structure with 9 sides to it. Combining this with the Indian element i.e. the Lotus flower, FariborzSahba conceptualized everything and set things in motion.

It uses the solar power to cater to its energy needs; precisely 120 KW out of the total 500 KW usage. Last but not least, it’s the most efficient way of energy consumption adopted by the temple, which is still in motion. Hence, it stands as one of the first temples in Delhi to make use of the solar energy.

Delhi is home to numerous architectural marvels out of which the Lotus Temple is only one among many! Akshardham Temple is another such marvel that one cannot miss if they’re in Delhi. Click here for an extensive guide on Akshardham Temple; What is so special about it? Who built it? Why? etc.

Oh, and if you’re looking for a place to stay in Delhi, we and the pets(We’ve got 7 playful paws at our Delhi hostel; 4 cats and 3 dogs!) would love to host you! Cheers!

Things To Do In Jodhpur : From Conventional To Offbeat