A Flight To The Marvelous World of Akshardham Temple

One of the largest and the most opulent of the Hindu places of worship in the world, the Akshardham Temple in Delhi stands in a grand fashion on the banks of river Yamuna.

Whenever there are talks about the best tourist attractions in the city or India for that matter, this place always tops the list. Why is that so? What is so utterly marvelous about this place that everyone doesn’t seem to have enough of it? One might say it is the architecture and the other might like the exhibits that are hugely popular. For the first timers and even the ones who have already experienced the grandiose world of the Akshardham Temple, we have a step-by-step guide that will deconstruct every aspect of the place. Go slow as you read along and absorb the details of this larger-than-life cultural experience.

The Story Behind its Conception 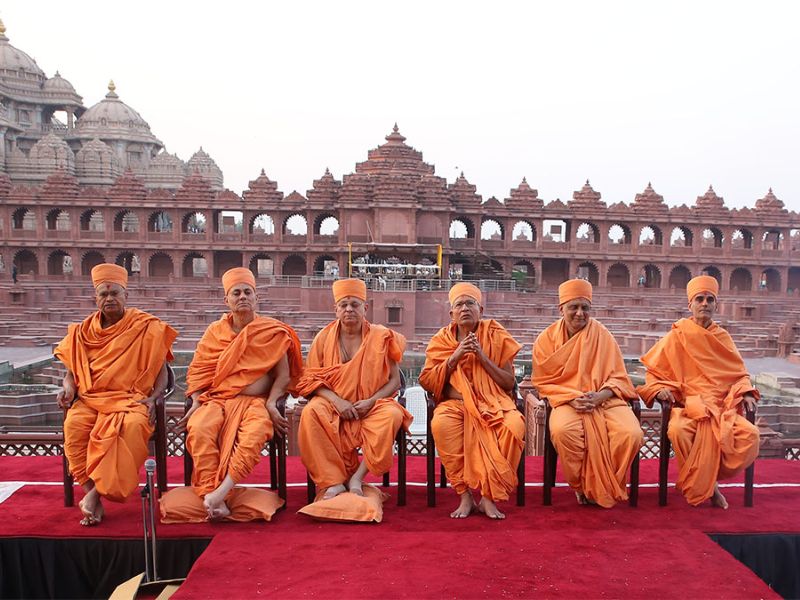 While wandering about the realms of Akshardham Temple, the most recurring thought in people’s mind is the story behind it. Was it just a great architectural project that was waiting to be unleashed? Or was it an idea and conceptualization of a visionary? The answer lies safely in the past, precisely the year 1968 when a saint called Yogiji Maharaj expressed his desire to have the temple built on the banks of the river Yamuna.

Yogiji back then was the head of the BAPS Swaminarayan Sanstha, a spiritual organization started by Swaminarayan. He was a yogi, an ascetic whose life and teachings brought a revival of central Hindu practices of Dharma (duty), Ahinsa (non-violence) and Brahmacharya (celibacy). The temple was supposed to be the manifestation of everything that the organization stood for. While the vision extended to it being an iconic architectural site that will become a great thing of beauty.

Things finally flourished many years later and Pramukh Swami Maharaj, Yogiji Maharaj’s successor as the spiritual head of BAPS, prompted the initiation of the project. Bodies like Delhi Development Authority (DDA) and the Uttar Pradesh Government were approached for the land and the execution of the plan. The project started in April 2000 and Akshardham Temple was officially opened on 6 November 2005.

What’s in Store for You?

Sprawled across 90 acres of land, the Akshardham Temple complex has a lot to offer. There is a temple right in the between of the complex, a welcome area, lush thematic gardens. Also, Hindu ritual areas for ceremonies like Rudra Abhishek, exhibits, artificial river for a boat ride, an artificial lake that surrounds the temple, an IMAX theatre, water show, musical fountains and a grand research center to name among a few.

Special Activities and Features to look forward to :

The primary attraction is main temple building that is known for its great architecture. The structure rises to about 141-foot (43 m) high, spans 316-foot (96 m) wide, and extends up to 356-foot (109 m) long. Both the inner realms and the outer façade of it comprises of a detailed carving of flora, fauna, dancers, deities, and musicians. The special feature about these intricate carvings is the elephant which is considered an extremely important animal in the Hindu traditions. There are 148 life-sized perfectly sculpted elephants on the base of the temple; all of it weighs a total of 3000 tons.

The thing that baffles everyone the most about the temple is that it uses no steel or concrete as a support. Now, that’s some serious architectural genius at work!

Ever wondered about the history of Hinduism; the many things it created, discovered and nurtured? Even if you didn’t, you won’t be disappointed with the history-telling fine exhibits the temple complex has in store for you. To enlighten the masses about the contributions of Vedic Indians to various fields such as science, astronomy, arts, literature, yoga, mathematics, and a plethora of other interesting facts, the temple also provides a 15 minutes long boat ride.

As you sail down the artificial river inside the temple complex, life size figures and robotics would dazzle you with all the knowledge about Vedic India in a fun and interesting manner. Be it the eminent people like mathematician-astronomers Aryabhata and Brahmagupta, grammarian Panini, contributor to the ancient art and science of Ayurveda, or even the Classical Sanskrit writer Kalidasa, there is a lot of history and Indian culture to absorb on this fun ride.

Measuring 300 by 300 feet with exactly 2,870 steps, 108 small shrines, the Musical Fountain (also known as the Yagnapurush Kund) is India’s largest step well. Yes, you need not head to a distant village in the state of Rajasthan just to witness a step well; the biggest one is right here in the Akshardham Temple. Even though every day the place acts as a resting place for the thousands of visitors during the daytime, the evenings here are reserved for an enigmatic Musical Fountain Show. It is a fun and interesting way to symbolize the circle of life.

The center of the fountain is its second most interesting feature after the musical show. It has an 8-petaled lotus shaped Yajna Kund that is designed according to a Hindu book of teachings called the Panchratra Shastra.

What is it that makes Akshardham special? 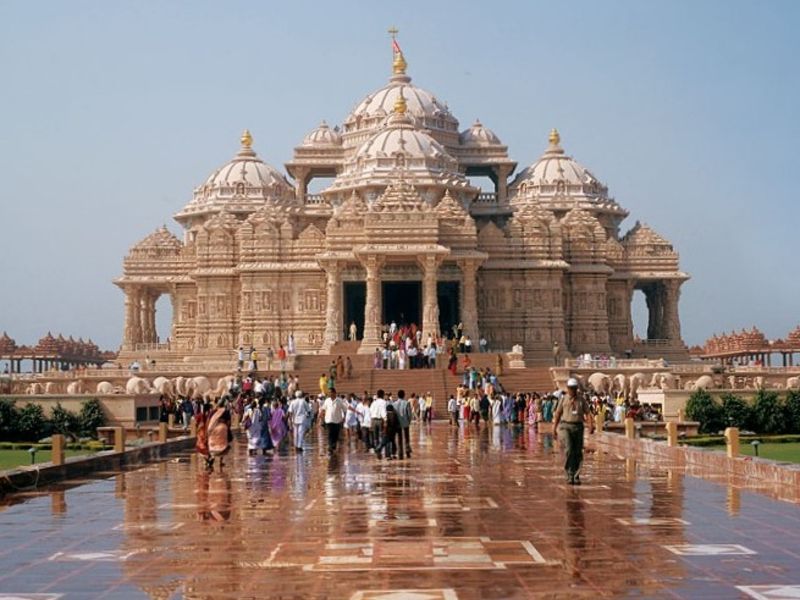 There are many things that make this larger-than-life temple. One is the vision and the creative genius that was involved in its planning, initiation, and execution. The structure symbolizes not just the tenets of Hinduism and history of India but also answers the many questions about the coming of humans on the face of this earth, their evolution, growth and lastly the many existential crises that engulf us all. Through video and audio aids, eternal messages gleaned from ancient Hindu culture such as non‐violence, vegetarianism, perseverance, prayers, morality, and family harmony is conveyed. All in all, it’s a representation of everything that is wrong yet harmonious in the world, depicted through the beliefs of the BAP Swaminarayan organization and the many stories & learnings in the holy Hindu texts.

Tidbits to remember while visiting the Akshardham Temple

Posts like this : Lotus Temple : A symbol of architectural intelligence and religious equality

6 Of The Best Places To Eat in Varanasi