The list of festivals in India is like a never-ending deal – it’s basically tenure! Always there, providing a sense of security and freedom, and demanding a whole lot of allegiance.

These consistent events are a big deal for almost every Indian, for the rituals and customs related to it tell the glorious stories of the past and also teach lessons for the present and the future. The practices are mostly plain, but take on an intense turn sometimes. These twisted rituals may seem simple to the ones performing them, for others it might turn out to be bizarre and unusual. Read on as we decode some of these customs and rituals for you in our East and North-East India edition. 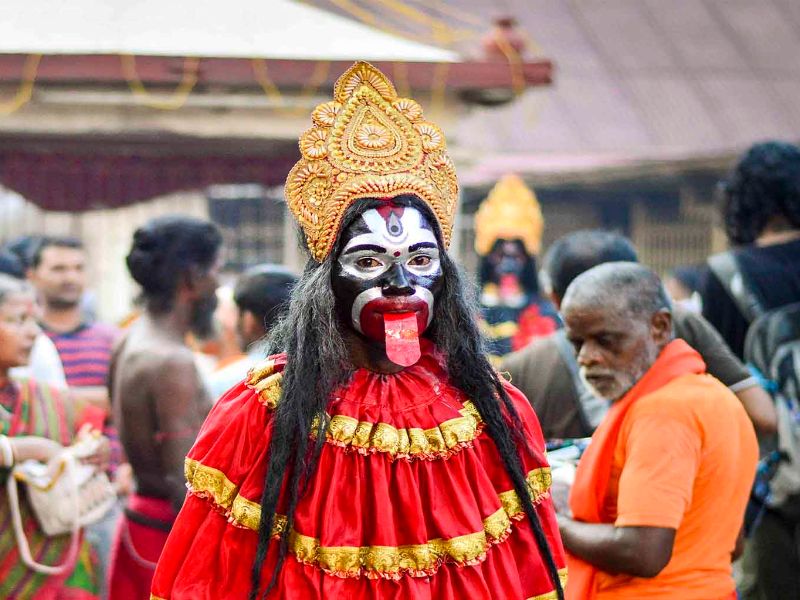 Pull your hands up ladies and shout like you mean it. Finally, there is a festival that celebrates the female body and its natural ways. Celebrated during the monsoons, the Ambubachi Mela is an annual Hindu affair which is dedicated to the Goddess Kamakhya (the Hindu Tantric Goddess of desire who had evolved in the Himalayan hills). Every year, the goddess is said to menstruate for 3 days; a time when the creative and nurturing powers of the ‘menses’ of Mother Earth becomes accessible to all the devotees. The main temple and the other ones in the region remain closed during these 3 days.

The goddess (not in the form of an idol but a Yoni-like stone over which a natural spring flows) is bathed and dressed daily in a red silk cloth, given fruits and light worships as offerings. This denotes the goddess to be resting while her period lasts. The red cloth (rakta bastra) on which the goddess sits is demanded by the devotees on the fourth day when the temple is opened again. This piece of cloth is considered auspicious and is tied by the devotees on their wrists. Since the festival has its origins in the Tantric Shakti cult prevalent in eastern parts of India, the Tantric sages also make public appearance during this time. They come and pay their respects to the goddess and put on display their psychic powers to the people.

When: Around the middle of June in the Assamese month of Ahaar.
Where: Kamakhya Temple, Guwahati, Assam. 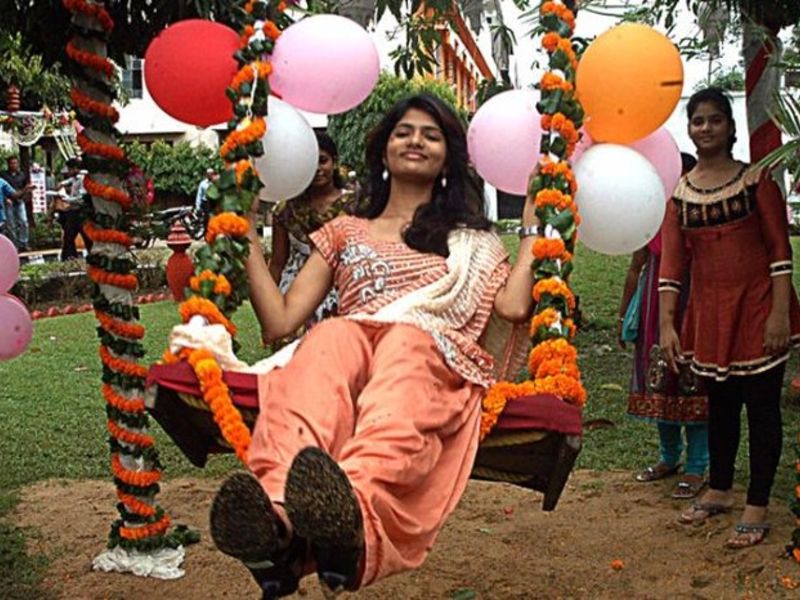 Unusual rituals in India seem to have no end. Why should it be so even? For a country where thousands and thousands of lives breathe in a throng of cultures and communities, something different and unique has to originate one day or the other. Out of many festivals in India, this one seems to be the most bizarre if compared to the rampant violence and crimes against women in a country like India. Here’s another menstruation festival! A land that seems to be guided by the rules of patriarchy actually celebrates the very identity of the woman; it celebrates a female’s onset of menstruation and worships her. What are the odds eh? The festival in doing so correlates the fertility of a harvest to that of a woman.

People believe that during the first 3 days of this 4 days long festival, Bhudevi i.e Mother Earth (the wife of Lord Jagannath) undergoes menstruation and is given a ceremonial bath on the fourth day. Each day of the festival has its own significance; either it describes the onset of some month or season. Any kind of agricultural work is suspended during the first 3 days as the earth is believed to be going through the process of regeneration. It’s said to be mimicking a woman’s menstrual cycle, something that shouldn’t be disturbed. The fourth and the last day denote the ceremonial bath of Bhudevi, which means the end of her ‘menstruation period’. The festival is basically a fun siesta for girls and women who dress up in their best attires, eat delicious food and play on swing sets all day. Well, why should boys have all the fun?!

When: In the month of June every year
Where: Orissa Processions and parades are a common thing when it comes to celebrating festivals, but the enormity of a few of them sets them apart. One such is the Jagannath Rath Yatra that is organized on a massive scale in the Indian state of Orissa. The procession receives a footfall of thousands of people at a single time and can be a ghastly and dangerous event even if a single thing goes wrong. During the festival, three richly decorated humongous chariots resembling the usual temple structures are pulled through the streets of Puri where the main temple of the gods is located. The idols of Lord Jagannath, his brother and sister are taken out in procession in these chariots to the Gundicha Temple (the home of the Lord’s aunt). In the same fashion, the idols are brought back to the main temple. Thus, the festival marks the Lord’s annual visit to his aunt’s place.

The bizarreness of the size of these chariots, the many months of work that goes into its construction and thousands of devotees that show up for this event make for a grand spectacle. Everything from the start till the end is covered live by all the major news channels and media all over the world. The non-Hindus and the foreigners get a chance to catch a glimpse of the deities on this day, which otherwise is not allowed in the temple. The amazing fact about this grand event is that it is the oldest procession of such kind in India as well as the world. There are also mentions of it in the age-old Hindu scriptures like Brahma Purana, Padma Purana, Skanda Purana and Kapila Samhita.

When: The second day of the bright fortnight of the Hindu month of Ashadha.
Where: Puri, Orissa 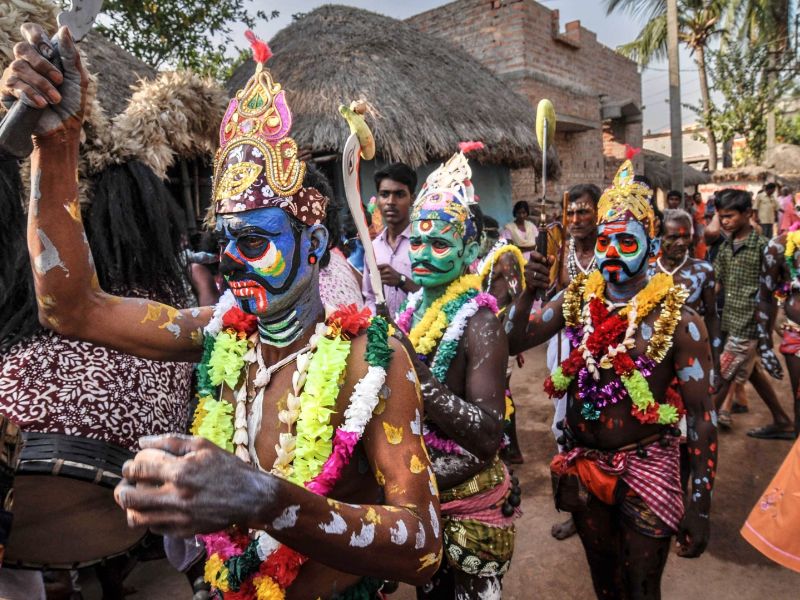 Welcome to another episode of Dancing with the Dead! You might want the stars more, but then it’s a famous saying that people become stars when they die (literally or not, who knows). No, we are not kidding you when we say that people dance with the dead on this weird festival called Gajan. This bizarre ritual includes the tantric sages smeared with paint on their faces and white powder on their bodies taking part in a procession. They dance to the beats of the drums with sharp agricultural tools, bones, and skulls in their hands.

The festival is centered on rains and the harvest that it brings along. The agricultural community gathers together to worship Lord Shiva and the local deities like Neel and Dharmathakur. Other bizarre rituals like body piercings, hooking the flesh and fire plays are also the part of the festival. The origins of this week-long spectacle are still unknown, but a lot of people relate it to the acts of conversion of Buddhist monks to Hinduism in the olden times. This is the reason why in spite of being a festival dedicated to Lord Shiva, the Tantric rituals of Buddhism like monasticism and others acts of penance got absorbed into it.

When: Mid-April – starting at the last week of Choitro (last month of the Bengali year) continuing until the end of the year.
Where: Mainly at Shiva temples in the villages of West Bengal. 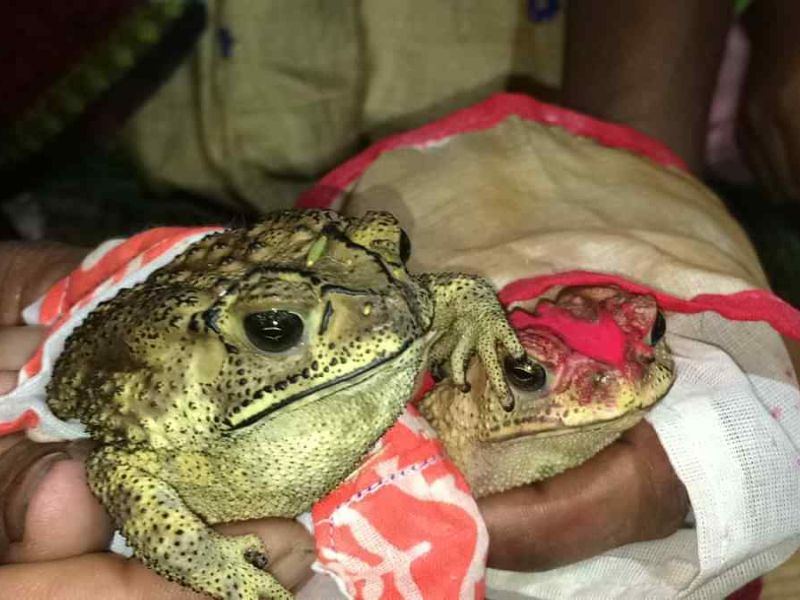 Out of the many unusual rituals in India, this bizarre festival seems to be the one that is taken straight out of some Disney movie. You would be amazed to know that is actually done to bring some good harvest to the land and not bring to life some prince who has been turned into a frog. Celebrated in the eastern state of Assam, the festival binds together the frogs into holy matrimony. This way the Barun Devata i.e the rain god is appeased and pleased. To express his happiness, the God brings rain to the earth and the parched lands smile again in ecstasy. The ceremony includes dressing up of the groom frog and bride frog for the marriage.

After that, there is a chanting of Vedic mantras and performance of Vedic rites and rituals. To make it seem like a human wedding, guests are entertained and women sing the Assamese songs of marriage. The occasion is famous among the farming communities of Assam whose daily living is dependent upon the rains and harvest. The whole idea of this festival is based upon by the belief that frogs represent rain, something auspicious for the both the climate and the harvest.

When: During droughts and the times when the rains are negligible or less
Where: Mainly Assam, although some communities in the states of Uttar Pradesh, Maharashtra and Tripura also celebrate the festival.

Whew! Too much to take in? Well, that’s a slice of India for you!