You’ve probably heard the story of the princess who kissed a frog as you were tucked into your bed as a kid.  What about a frog marrying another frog? Yes, my dear readers; India is indeed an amazing country and so are its people and animals, but its bizarreness and unpredictability goes on to infinity and beyond!

Do you know that there are certain pockets in the country where people organize marriages of frogs?If not, then read this post and marvel at India and her culture.

It is All About The Weather! 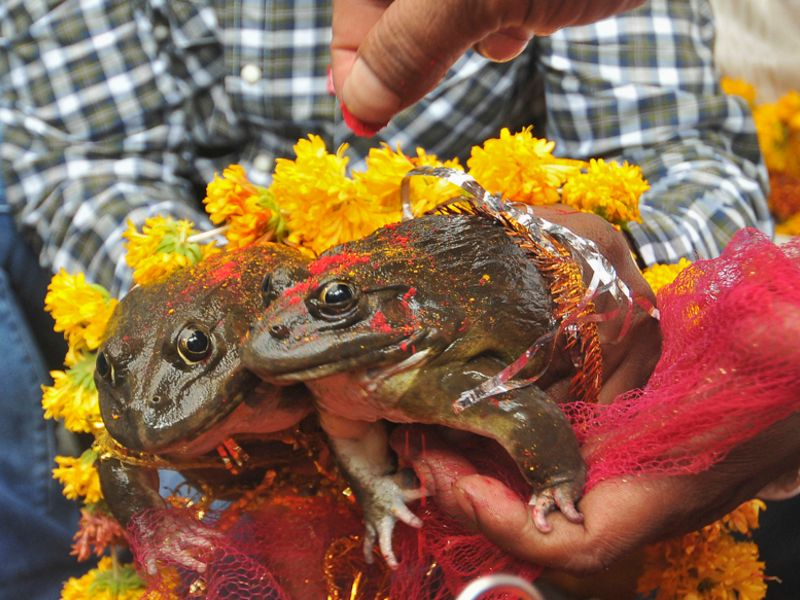 Almost all the festivals and other traditions in India are related to weather and India still depends to a large extent on rains. Rains and agriculture go hand in hand. Now you would be thinking why India has to depend on rains when making canals can help the country out!

You are right as well as wrong. Confused? Bear with me.

Many parts of India still do not have canals; so for irrigation, our farmers have to depend upon rains. And when the rains fail, the farmers and the rest of the country cry. But many people have thought out several ways to please the rain gods. And voila, one of them is the marriage of frogs.

Frogs And Rain : You Must Be Joking!

Not quite. When it rains, the frogs croak. Many Indians believe that when frogs croak, it means that rains are just a few days away. The frogs, apparently, have a sixth sense for detecting impending rains. But when frogs don’t croak before the start of the rains, it is time to worry. 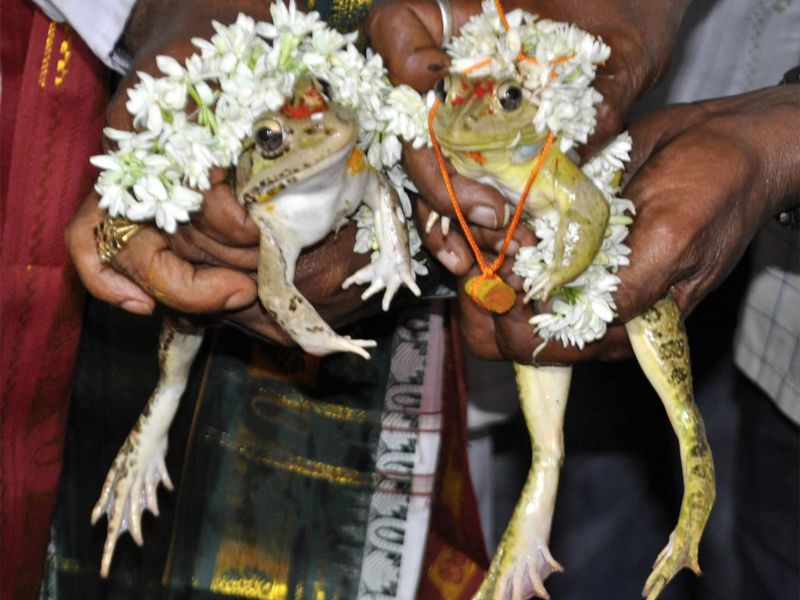 To make the frogs croak again, villagers organize frog marriages. And mind you, these marriages are quite like the normal marriages that you and I attend. The marriage process goes like this; two healthy and ‘adult’ male and female frogs are identified and their ‘gotras’ are verified. The word ‘gotra’ refers to their lineages. It is important that the two would-be life partners do not belong to the same family; else, the progeny would suffer from diseases.

Next, relatives of the ‘bride’ go to the ‘groom’s’ house and consult about a mutually agreeable date for the wedding. It is a serious process and all the necessary precautions are undertaken. All the planetary constellations are checked and the best possible date is identified. Once the date is finalized, then both the partners send out invitations to their relatives. Relatives here do not mean other frogs of the well; it is the other villagers that are being invited.

Meanwhile, the ‘bride’ is made ready for the wedding. Turmeric powder or ‘haldi’ is applied on her body so that her skin glows. She is treated to other cosmetic procedures also. Mind it, the she frog is a ‘bride’ in her own right and is treated like a real human being.

On the fateful day, at the appointed hour, the ‘groom’ along with his marriage party comes to the ‘bride’s’ place. The ‘frog’ dulha and his friends dance to the tunes of popular Bollywood numbers. There are many songs and dances in the Baraat and everybody enjoys as if they’re attending their own friend’s marriage.

I wonder what the ‘groom’ must be thinking at this point in time. Does he feel threatened? Is he in pain because of all the noise of music and crackers? Or is he just wondering where humanity went wrong? 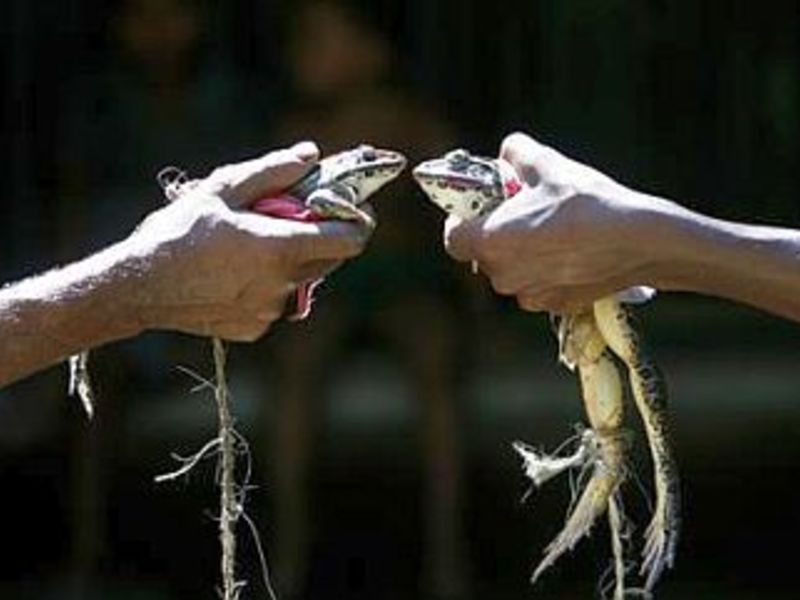 Much like an average Indian, the groom and the bride exchange vows and garlands and do the Saat Pheras; the holy and sacred seven circumambulations that signify the seven vows that the ‘bride’ and the ‘groom’ exchange. After the seven steps or circumambulations, both the frogs are declared husband and wife!

Any Indian marriage is incomplete without a grand feast. Frog marriages are always accompanied by a feast where the entire locality or the village is invited. Everyone comes and haves a meal to their heart’s content.

What Happens To The Frogs?

And they live happily ever after! *sigh* No, the frogs don’t live life husband and wife forever. After the marriage is over, both the creatures go back to their respective ponds, lakes or wells.

Post the marriage, villagers hope that the rain gods would smile upon them and give them abundant showers. It is all a matter of hopes, prayers, and a small marriage ceremony.

Most of these frog marriages happen in the months of May and June when there are hot weather conditions in India.

Nobody knows when this practice of frog weddings started. However, in the Hindu tradition, it is said that Vishnu took the avatar of an amphibian to save the human race. Perhaps, the frog marriage practice is an echo of that incident. After all, frogs are amphibians too. 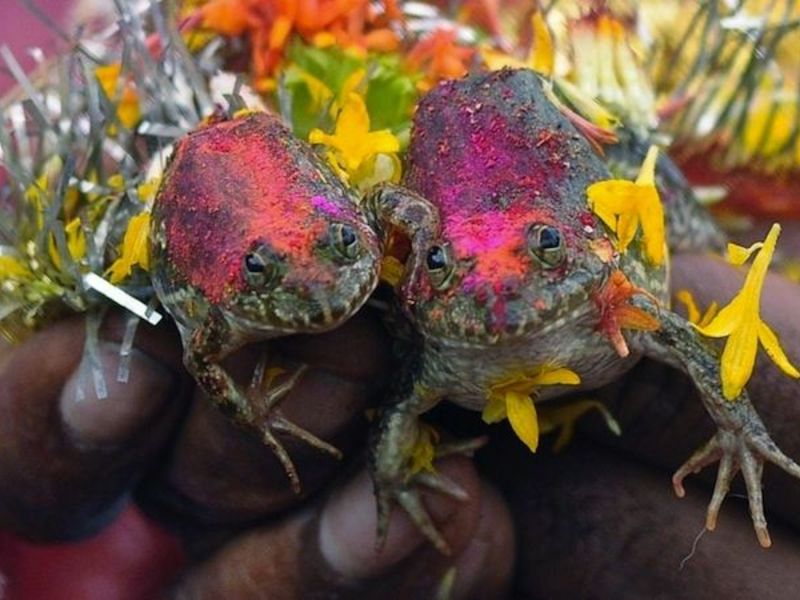 Some people might think that this practice is senseless and is a waste of money. But don’t you realize that frog marriages encourage people to come together and enjoy? However bizarre it may look from the surface, at the end of the day, people are leaving their worries behind for a day to come together and celebrate! They go back home with wonderful memories and happy hearts.

Frog marriage is a common practice in Varanasi, Sonebhadra, parts of Tamil Nadu, Rajasthan, Madhya Pradesh and even the Himalayas. A few years ago, villagers of Phatikori in Assam organized a frog marriage where a lot of people assembled and witnessed the joyous occasion. In Assam, frog marriage is called ‘Bhekuliya Biya’. The word ‘Bhekuliya’ means Frog and ‘Biya’ means marriage.

To conclude, though frog marriages may seem weird to the foreign visitors to India, these functions have some deep rooted meanings to which you and I may not agree. To me, frog marriage is a queer way of thanking the environment. Would would you say?

7 Must-Follow Health Tips While in India